[Flashback] thegatewaypundit.com runs a completely fake story or did they generate a hoax?

I hold my nose and check out Drudge once and awhile, but lately I've noticed a familiar and very suspicious website rising in the ranks, a website that once was only featured at the bottom of the front page and is now frequently getting top billing. This webite is known as 'The Gateway Pundit' and last year I discovered that Jim Hoft, the man behind 'The Gateway Pundit' was most likely behind a hoax story using a Twitter sock puppet to drum up irrational fear about muslims inside the United States. 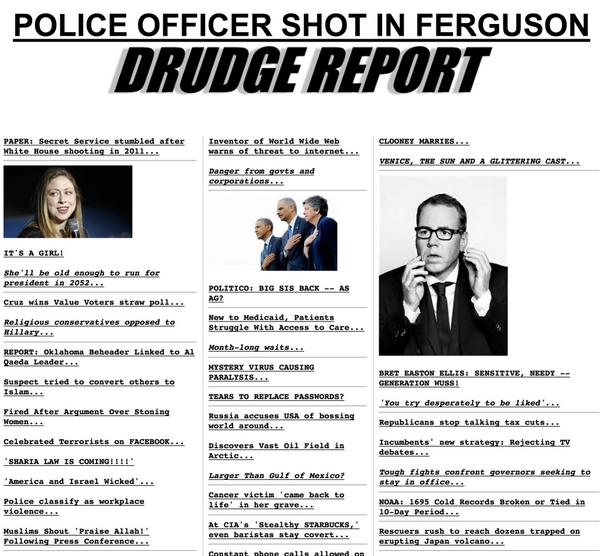 See the story in the very bottom left corner? It was a sister story that spread around generic hysterical moronic right-wing websites and talk radio all weekend.

So of course finding the headline completely bullshit on it's face I had to go watch the press conference for myself here.

Nobody yells anything during it.

On Drudge they linked to the original source for the story, an independently operated conservative website called  'The Gateway Pundit'. 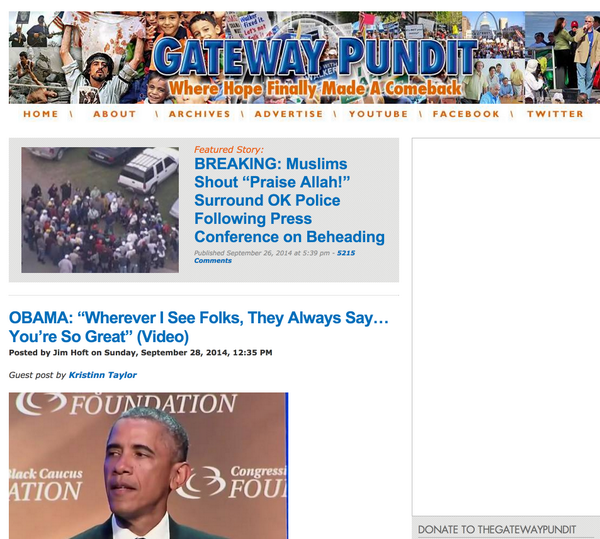 When you click on the actual story you see immediately what the supposed 'source' was. 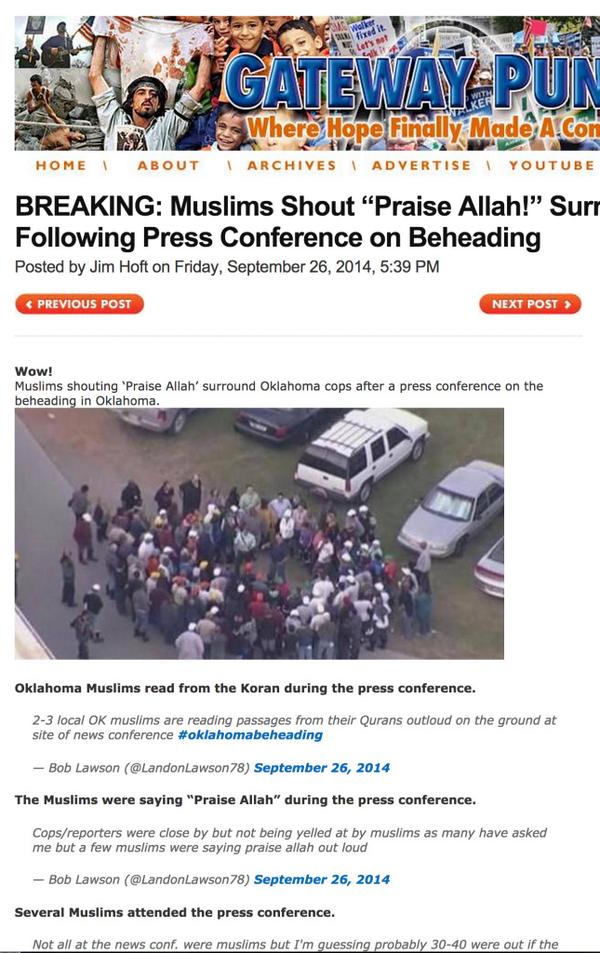 A guy named Bob Lawson who allegedly goes by the twitter handle @LandonLawson78
whose Twitter account no longer exists.  On Google cache you can see that it's a very inactive account and only has 17 followers. 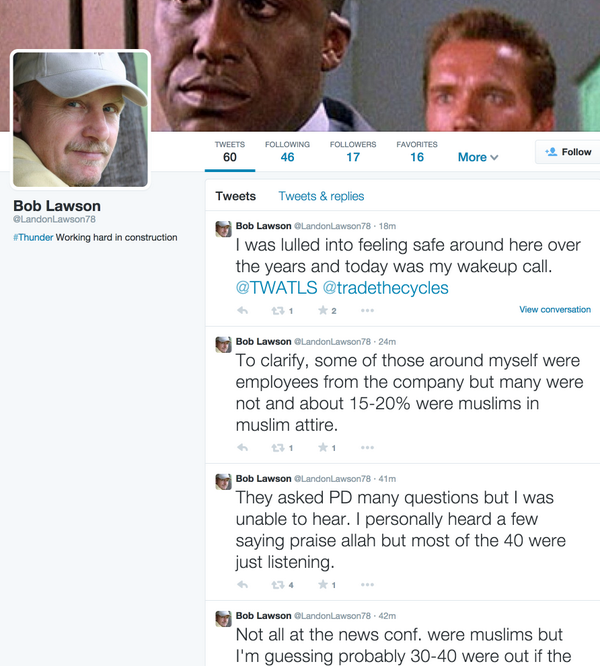 Suspicious on its face, but not 'proof' that it's a fake or sock puppet twitter account (yet) Whoever was running this account wanted to throw in convincing tweets to show it was just some regular 'joe-6-pack' construction worker.

Oddly no one called out this person as being fake or making up the story, but his account was inexplicably self immolated within hours of the story going viral through ring wing media. The Twitter account was doing a great job of riling people up before that though. 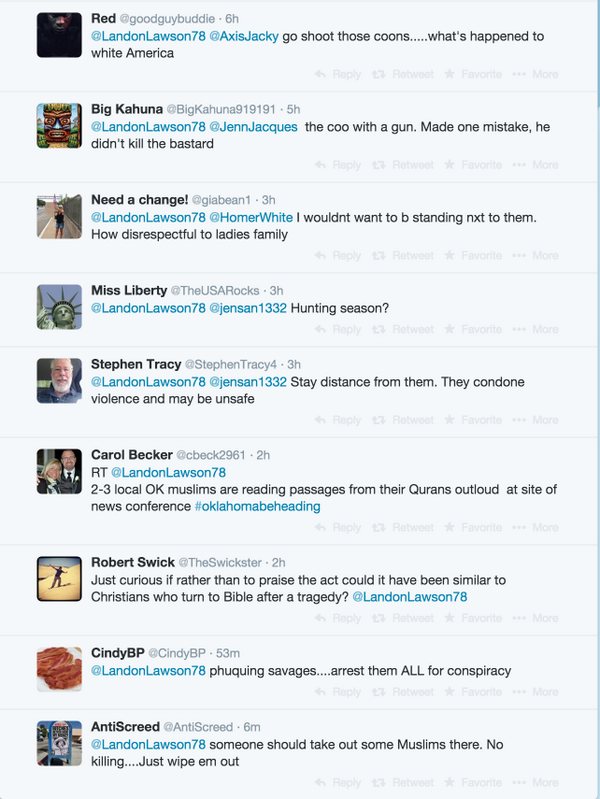 Next step was to find out if the picture was of a real person or if a Bob Lawson lived in Oklahoma and existed anywhere else online. With a quick reverse image lookup it became clear this was a sock puppet/fake twitter account to begin with. Someone chose a stock image that looked like how someone who might run a click bait website 'The Gateway Pundit' might imagine a redneck in Oklahoma looks. Interestingly only one conservative outlet I could find ran a retraction, but they mentioned nothing about the obvious fake nature of the 'source' and originally ran with it as well.


Breitbart only confirms the story is false by asking the police, even though from 10 minutes of google sleuthing you could have found pretty convincing evidence it was fake from the very beginning. Apparently the hysteria about muslim terrorism is more important than fact checking (which is obviously nothing new to people who've landed on this blog in the first place).

So this begs the question, how many stories does the Gatewaypundit.com make up out of thin air or base on clearly fake and unreliable information? 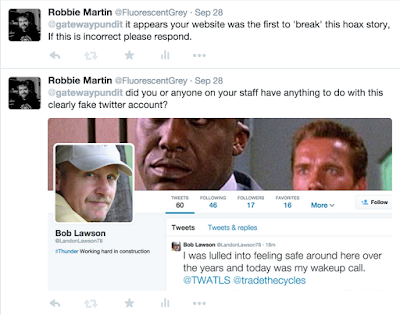 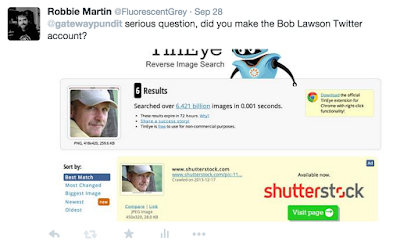 If this wasn't Jim Hoft's sock puppet account, he could have answered my inquiry with a simple 'no' but he chose to ignore me instead.

After posting this information about Gateway Pundit, Daniel Wright responded with a few good points about plausible deniability:

He's right, by creating a sock puppet and then basing a 'breaking' story off of said sock puppet that goes poof within hours of a story going viral is a pretty flawless way to cover your tracks. This doesn't prove Jim Hoft was directly behind any of it, but for those who have seen the pattern before it's all too easy to pull something like this off.

[In 2004 a few friends and I managed to pull off a hoax that was picked up by the Associated Press and Reuters then filtered down to almost every major news agency in the world. It took a full 24 hours before news agencies retracted the story as false]
Posted by Anonymous at 3:53 PM